Protesting in Malaysia can be very polarizing, there are people who believe it is absolutely wrong, troublemaking and unnecessary but there are also those who believe that it is the most important thing to do given the situation in our country. If you’re thinking of protesting, here are something to keep in mind.

Within the current climate in which we live, there are two major factors to consider before deciding to protest:

Once you’ve considered these factors and decide to go ahead with attending:

If you are unable to attend the protest, there are still many ways to show your solidarity

As we’ve seen with the events that went down yesterday, we’re all still fighting for democracy and our constitutional rights under it. Safety is not always guaranteed and there is no shame in not attending the physical protest and showing solidarity in other ways.

The goal of all of this is to make Malaysia the best it can possibly be because we love our country.

Follow us and get the latest news delivered to your timeline!
lawanletsgetthisstraightprotestprotesting
Previous ArticleWhat’s Happening In Afghanistan?Next ArticleSo It’s Sabri, Now What?

For a long time, conversations about sex in our Asian culture have been extremely taboo. Sex was an extremely hush-hush topic only spoken about in terms of staying celibate until marriage. In schools it is barely taught with many of us having serious gaps in knowledge within sex education with it skimmed over or omitted completely. As a movement, sex positivity has grown immensely in the west and is slowly gaining traction here in Asia too. But because of the culture that surrounds sex, there are many myths being spread on what sex positivity is – so we’re here to break it down and debunk some of these misconceptions:

There is no educational goal of sex positivity

Actually the main goal of the sex positivity movement is consent education. Education surrounding consent, especially in Malaysia, is extremely inaccessible to those who need it the most. The sex positivity movement tries to bring forth the knowledge that consent is key in most aspects of life, not just sex. Even in giving someone a hug, you should seek consent before making any physical contact. This isn’t just for adults to understand, but is imperative for children at a young age to also comprehend as it lays a foundation for a person who is able to both understand and respect boundaries.

Being sex positive means being pro-pornography

Sex positivity is not about promoting pornography, or even being supportive of it. Many of the largest pornography producers are actually extremely exploitative towards the actors and actress. They allow for sex-trafficking, child abuse and sexual assault to occur on their shoots and in the videos that are shared on their platforms. The sex positivity movement absolutely does not support this, what it does support is fairly and ethically-made movies that are within the legal limits of the country in which it operates. Sex positivity also does not shame individuals who do enjoy pornography, rather aids in educating them for making educated choices in what they watch.

Sex positivity is only for women

Sex positivity is for everybody!! In fact, sex positivity is extremely important for men because open conversations around sex and consent aren’t as commonplace the way they are with women. It is important to normalise these conversations because it creates a new culture of open-ness and inclusivity – which is the root of the sex positivity movement. It is for everyone and anyone that wants to be part of it. Together, we can create a world where people can embrace their sexuality and no longer feel shame about their natural human impulse.

Even though opening up the conversation and talking about sex positivity can be awkward or difficult it is our responsibility to make knowledge of topics like this as widespread as possible. Sex positivity is a movement that is here to help everyone and do it’s best to  prevent sexual violence. Education is one of the main ways we can actually bring awareness to the hows and whys of situations where sexual violence can occur. In doing so, a new culture of safe and consensual sex can become the norm.

In 2021, the need for an article explaining consent is disappointing. Haven’t we come to a point where we understand that no means no and that’s that? Although we have come leaps and bounds in terms of understanding what constitutes sexual assault and holding predators more accountable than ever, there are still many individuals out there who have a hard time grasping the severity and importance of the issue. 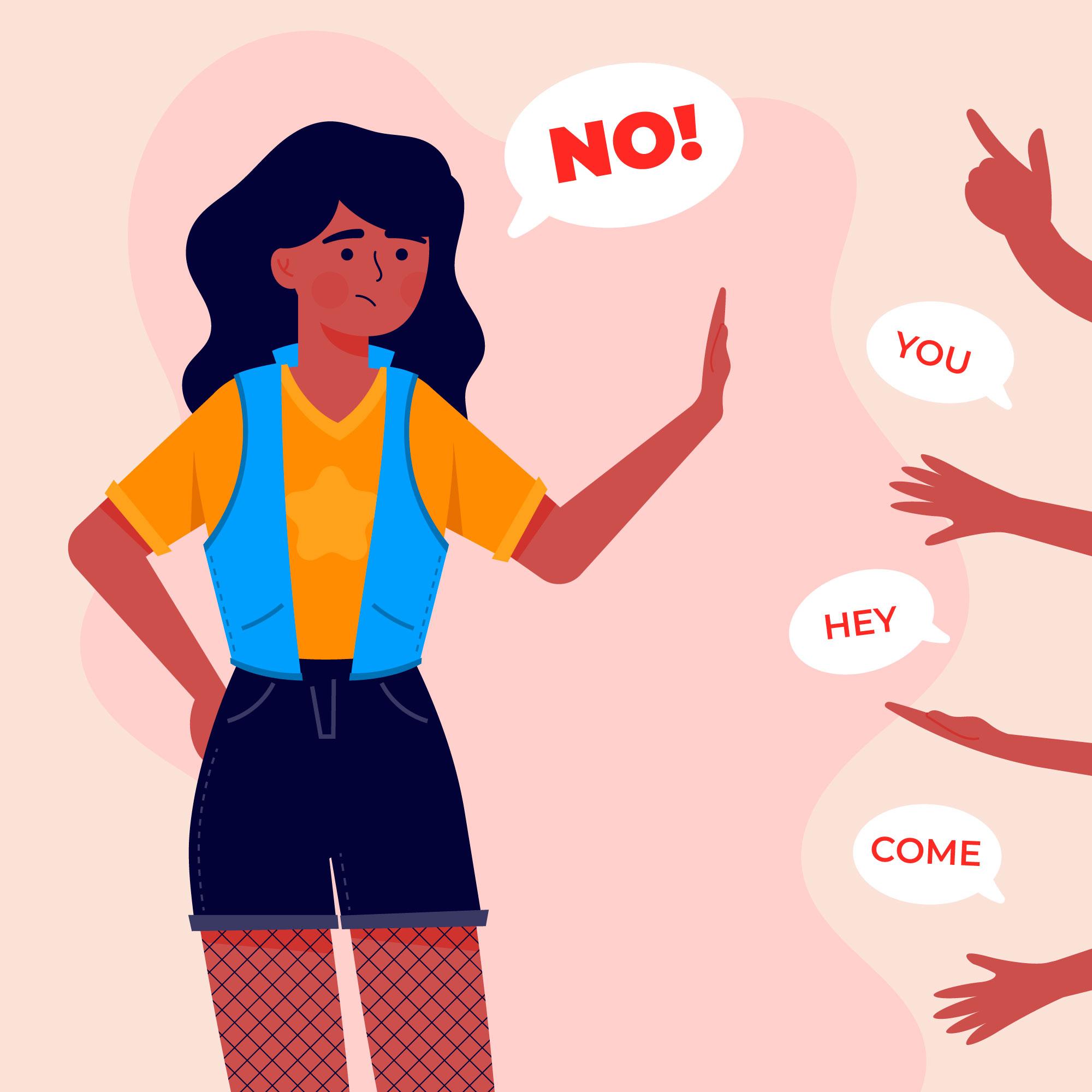 To put it simply, consent refers to the act of giving permission in order to perform an action. For example, agreeing to go to the movies with your friends would be a form of giving consent. It’s not a concept that is hard to understand and in our daily lives we give and seek consent for lots of different things. However, when it comes to the realm of sexual behavior, understanding the nuances of consent seems to be difficult to comprehend for some individuals.

What most people understand about consent is that a simple yes means the green light in going forward, however, there are many other factors that play into the legitimacy of consent. If someone is under the influence of drugs or alcohol they may not be able to consent to anything because they aren’t in the right state of mind. If someone is below the age of 18 and doesn’t  fully understand what they are getting themselves into, they are also unlikely able to give consent. Sexual consent isn’t cut and dry because sex isn’t cut and dry. It’s an adult act and should be treated as such – only in the right state of mind, with all the information presented is an individual actually able to give consent. What you should be looking for is not a haphazard yes, rather one that is enthusiastic and excited to be in the situation with you.

“A person’s value doesn’t stem from their sexuality and this misinformed narrative where individuals believe that being rejected or receiving a no equals a lessened value unto themselves is a major reason why people find it so hard to either grasp or – in the worst case- care about obtaining consent.”

At the end of the day, sex is a beautiful thing that brings individuals closer together. It can bring babies into the world and plays a huge part in the lives of many adults. However, because it has become such a taboo subject in our culture where we can barely even speak about it, so many individuals don’t understand how to (1) ask for consent or (2) determine if the consent they are getting is coming from a person who is actually able to give it. These small distinctions between an informed and enthusiastic yes or a pressure-induced inebriated yes are where the nuances of consent exist. Understanding this is the key to understanding consent. 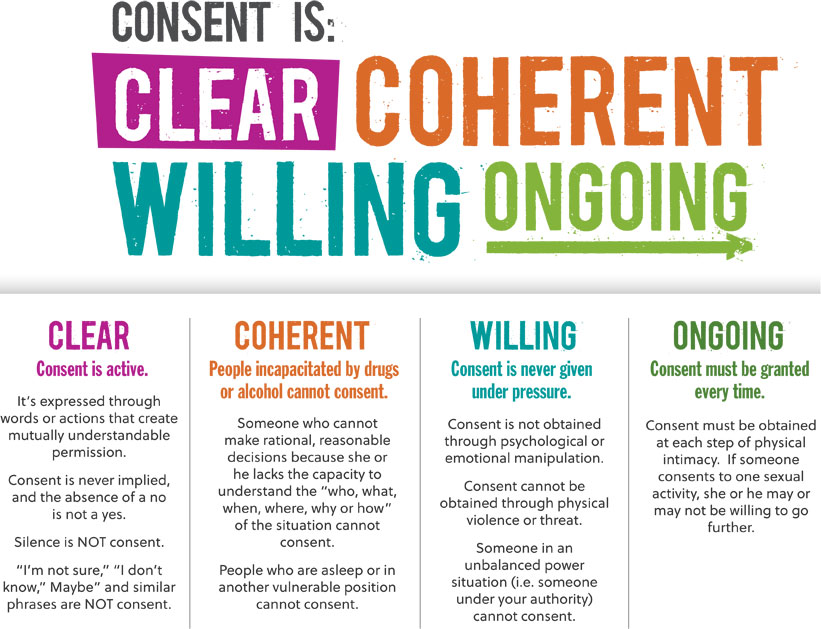 The only way around this is through education. Our school system needs to bring about the subject of consent from a young age. Only through normalizing that it is okay to say no and to respect the no of someone else, will we be able to bring up a generation of adults who have no issue comprehending consent. A person’s value doesn’t stem from their sexuality and this misinformed narrative where individuals believe that being rejected or receiving a no equals a lessened value unto themselves is a major reason why people find it so hard to either grasp or – in the worst case- care about obtaining consent.

As a rule of thumb, remember that consent is key in creating meaningful physical and sexual experiences. We all have a right to make our own decisions about our bodies and who we choose to share them with. If someone says no to you, take it in stride and move on. Don’t try to guilt, persuade or force them into doing something they don’t want to. The only way that consent should look is with excitement and enthusiasm coming from a person who is in the right state of mind to make a decision – that way, you’ll definitely be in for a good time!